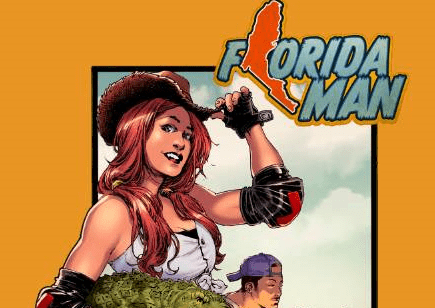 It’s a special Florida Retailers Exclusive cover to Mike Baron’s outrageous FLORIDA MAN #1! American Mythology Productions gave retailers who live in the Sunshine State a special edition they could sell to their proud Floridian comic collectors! But we aren’t stopping there, today everyone can be a Florida Man or Woman no matter where you live. Get this special edition while you can at the same low, low cover price of $3.99! 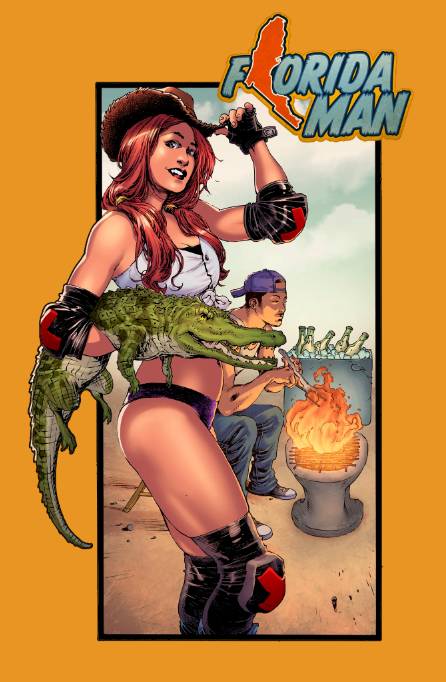 This limited series of 3 comics not only adapts the original graphic novel that you backed in last year’s crowdfund campaign, but contains new scenes, new pin-ups, hilarious back-matter, and even continues the story from the end of the graphic novel, and still tells a heart-warming story that’s squarely aimed at grown-ups who still love comics.
“Modern comic readers are hungry for more than superheroes,” says Mike Baron. “They want drama, horror, and yes, comedy. We need laughter and that’s what these comics are about!”
Mike Baron is bringing back “funny books” with a serialized comic limited series reprinting his crowd funded graphic novel with a few new twists. Now the quintessential “Florida Man” is finally defined in all his outrageous glory straight from the heart of one of the most magical and bizarre states in America.
“Grab yourself a six pack, your twelve-gauge, and a head full of crazy! Florida Man is a wild, redneck fever dream fueled by a cache of increasingly funny and absurd circumstances!” Morgan Quaid, Super Serious Comics
Call your comic shop today and tell them to order! You can view the covers and item numbers at the link below.